We are working in two estuaries right now.

Our control site is the Hawkesbury River, where there is no POMS. Our project is strongly supported by the Hawkesbury growers – special thanks to John Stubbs and Bruce Alford of the Broken Bay Oysters Association! We are closely monitoring a batch of triploid spat from arrival on the river until the time they go to market. Every 2 weeks we collect a random sample from a series of randomly selected baskets which are part of John’s and Bruce’s normal production runs. The baskets are at two different leases at present. Soon the oysters will outgrow these baskets and some will be taken to two more sites up river. Then we will be monitoring the oysters at four sites in the Hawkesbury River. 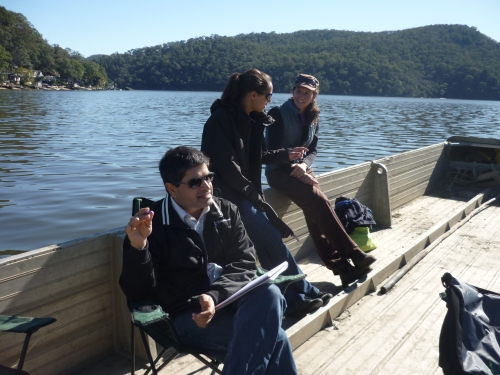 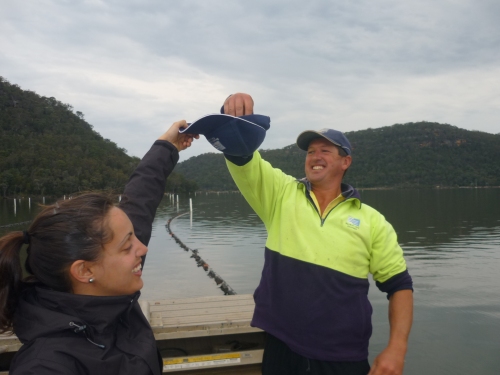 Temperature data logger inserted with spat in a sock 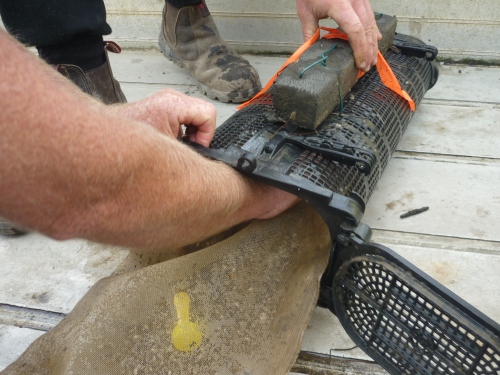 The sock is inserted into a basket

The sites are all different. We have placed temperature recorders in the baskets, and we also placed a deep water temperature and salinty logger on each lease. We collect a reading every 30 minutes.

We will match these readings with data collected by Hornsby Shire Council from their in-stream probes – many thanks to Peter Coad. Finally we will correlate all of this information with measurements of oyster health including growth rate. We are working closely with Dr Ana Rubio from Wollongong University on this aspect because she has experimental oysters in the river on one of the leases we use.

Ika has the probe secured by a rope and lowers it to the correct depth within the housing; this makes it very easy to retrieve the probe 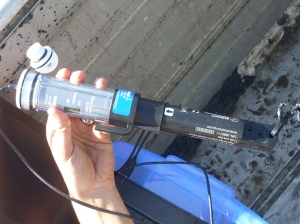 Ika downloads the data using a reader which is connected to a laptop computer; the probe needs to be cleaned and calibrated every 2 weeks

Our main research site for POMS disease is the Georges River, on three leases owned by Bob, Ted and Len Drake, who are also strongly supporting this research! We would be lost without their expertise and friendly help. 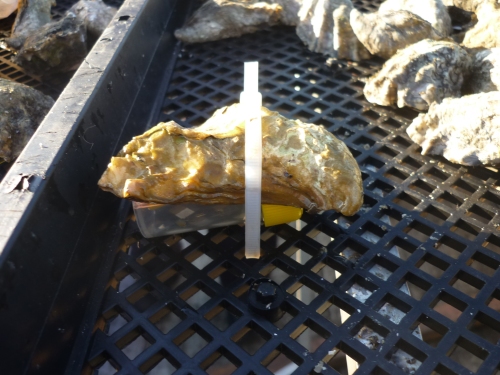 We have placed data loggers on trays with the oysters, and protected them from direct sunlight under an oyster shell

As well as installing data loggers in trays with the oysters, and sub-tidal salinity and temperature probes, we will use data collected in stream from automatic data loggers that are managed by the Sydney Meteropolitan Catchment Management Authority – many thanks to John Dahlenburg!

Whenever we sample oysters we use very strict protocols for randomisation. This enables us to extrapolate results across the whole batch on each lease, without having to test every single oyster.

Location of our three sites (A, B, C) in Woolooware Bay. Image courtesy of NSW I&I.