Experiment 2: Comparison of husbandry practices in the Georges River – trays and floating baskets

We checked all the baskets and trays six days after they were placed at our three sites (i.e. placed 24th November and checked 30th November). All of our oysters were alive, regardless of the age or location in the river. This result is quite surprising as they are located closed to our dying oysters (in sites A and C, while site B remains healthy so far). Several hypotheses might explain this 100% survival such as an incubation period longer than 6 days between infection and the first signs of mortality? Or intermittent transmission of POMS in pulses in the river?

We checked all baskets and trays over these last three weeks (7th-14th-20th December). By 7th December spat had started dying at site A with a mortality of 100%  in tray and 20%  in baskets. Few adults were found dead in the tray (6/60) or baskets (3/60). No mortality was found at site B and C. On the 14th and 20th of December similar results were found: no mortality observed at site B and C suggesting that POMS outbreak had stopped. Eventually half of the spat in the baskets had died at site A, with low mortality of adults whatever the culture system (<30%).

All trays and baskets will be checked next week (29th December). 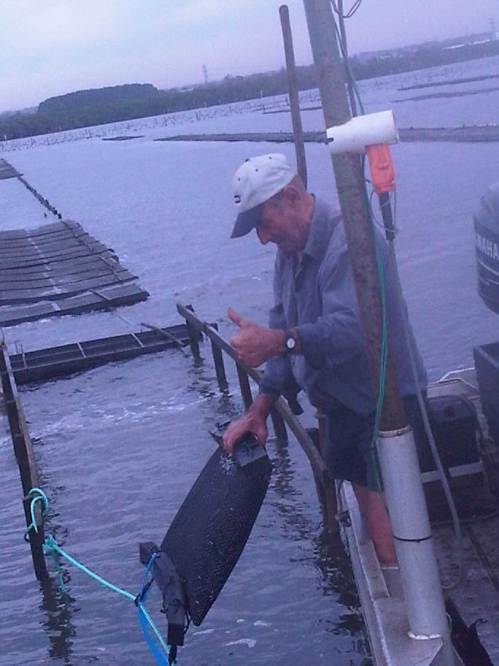 Bob Drake checking oysters in a basket - all is well!

All sites were regularly checked and  no more death was recorded in trays or floating baskets from 29th December  2011 until early February 2012, when the second outbreak started.

On the 10th of February, 100% mortality of spat in trays was recorded at sites B and C, in contrast to site A where all spat in trays were still alive (last inspection 17th February). Additionally, one or two year old oysters showed 50% and 20% mortality, respectively, at sites B and C. None of the adult oysters (1 and 2 year old) were dead at site A. These results suggest that this second POMS outbreak has impacted only sites B and C so far.

Interestingly, all oysters (spat, 1 and 2 year old oysters) in floating baskets are alive at all sites. Given the fact that floating baskets are placed next to the trays in sites B and C, it’s surprising to observe this difference of mortality (0 vs. 100%) between the two cultivation methods. Such a difference might be the result of (1) the patchy character of POMS disease, which shows a non-uniform transmission within the Bay, but also within sites and within trays (data not shown); or (2) a non-uniform distribution of the virus in the water column (first centimetres of the water column free of viral particles?). Indeed, although trays are deeply immerged at high tide, floating baskets stay at the surface at all times. At this stage we can just hypothesise as more lab/field observations have to be made to interpret these results with confidence.

As most of the spat on trays died during the second outbreak in February (sites B and C), a batch of new healthy spat (size ~ 50mm) coming from the Hawkesbury has been placed on trays and baskets at all sites on the 16th of March in order to be able to detect a return of viral activity. These new spat and the remaining adult oysters were checked  5 days later (20/03): we observed a couple of dead oysters in site A only  both in baskets (3 spat, 4 adults) and trays (2 spat, 6 adults). These oysters were collected and tested for POMS virus by PCR. Results revealed a relatively high presence of viral particle in oyster tissues which was surprising in regards with the apparent low percentage of mortality of spat at that time (<10%).

Another check was performed at the beginning of April (02/04) and revealed high mortalities of spat in trays: 40% at site A and 63% at site C. These oysters have not been tested for POMS yet but the strong mortality rates suggest that POMS virus was still active at these sites during early April. In the same time, all the spat placed in floating baskets were alive at these same sites. Once again, spat in floating baskets have not been impacted by POMS virus, as it has already been  observed during the second outbreak in February. Interesting…